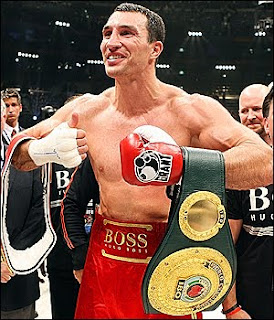 Any fighter hoping to earn mention among heavyweight greats from yesteryear is met with critical eyes, and must endure likely unfair comparisons to former champions and contenders.

Many of the most famous fighters in boxing cut their teeth in the heavyweight division. And until the wave of popularity currently driving mixed martial arts rolled into town, the Heavyweight Champion of the World (especially when there was only one) was the consensus "baddest man on the planet."

Lennox Lewis, for example, was plagued by such comparisons throughout his respectable career. It didn't help that he had the personality of a wet shoe, and settled into a more cautious and safety-first style before retiring in February 2004. Aside from that though, he was unlucky enough to succeed more exciting and famous American champs Mike Tyson and Evander Holyfield, among a number of other belt-holders generally glossed over by boxing historians.

Whether or not the big men of yore were actually better fighters worthy of the nostalgic invincibility is of course fairly subjective, though the overall toughness of the division in particular eras isn't quite as difficult to determine.

Current unified heavyweight champion Wladimir Klitschko finds himself in the unfortunate position of dominating what is potentially the worst heavyweight division ever.

In the wake of his 10th round knockout of former victim Sam Peter, the lament over Wlad's defensive -- and at times downright John Ruiz-esque -- recent performances seems to be at its peak.

Carrying a record of 55-3 (49 KO), the Ukrainian rose to fame fighting mainly in Germany, known for his offensive tools and crushing punching power, even in his dangerous jab. Wlad suffered his first setback in an 11th round TKO loss to journeyman Ross Puritty in 1998, though the loss is generally written off as a lesson learned, as Wladimir was exhausted by the 9th, and big brother Vitali avenged the blemish for him anyways.

Between his first loss and 2003, Wlad rebuilt in Germany and, to a lesser extent, in the US, by trouncing hapless European pugs overseas, and questionable opposition in the States, garnering the attention of HBO along the way.

As Lennox Lewis neared retirement, both Klitschko brothers were thought to be the next generation of athletic big men, though Wladimir was generally billed as the better fighter.

Corrie Sanders crashed HBO's party as a late sub opponent in March of 2003, stopping Wladimir in two rounds, knocking him down four times in front of an Arena of Klitschko fans in Germany. The tape-delay broadcast seemed to give American boxing fans proper ammunition for discrediting the younger brother.

After again retreating overseas and hooking up with famed Kronk Gym trainer Manny Steward, Wlad returned to HBO, facing Lamon Brewster in the main event of a broadcast that also featured the first welterweight fight between Cory Spinks and Zab Judah. A notable amateur but underachieving pro, Brewster was expected to stroll his way to a loss as he had against Cliff Etienne (in a great heavyweight brawl), and Charles Shufford.

Disaster struck for a second time, as Wlad was TKO'd in 5 after beating the hell out of Brewster for the first three rounds and change. By the 5th round, Klitschko could barely stand up, much less survive the flush left hooks bouncing off his head.

Steward would later attribute the loss to Wlad's body being covered by too much vaseline, which apparently didn't allow him to sweat enough.

Since the surprise defeat to Brewster, Wladmir has rattled off 12 straight wins, including a bludgeoning of his most recent conqueror Brewster. Despite going the distance only twice in 12 fights, the criticism has been plenty thick, and understandably so for reasons mentioned earlier.

Wlad's career as a whole seems to be easily split into two parts: the robotic walk in the park leading up to the Brewster loss, and the style adjustments under Steward thereafter.

Steward's early influence was evident in tough wins against DeVarryl Williamson and Sam Peter the first time around, but Wlad uncomfortably and improperly clutched from the wrong distance and at the wrong times.

Following the first struggle against Peter that saw Wlad knocked down three times in three separate rounds, Wlad rebounded with a 7th round destruction of Chris Byrd, who he had previously beaten down amid mild controversy, with Byrd claimed the 6'6" younger brother had tampered with his gloves or placed a foreign substance on them, which blinded Byrd early in the fight, and took his IBF title in the process in April of 2006.

In the four-plus years since stampeding Byrd, Wlad has defended his title nine times, eight by stoppage.

Essentially clearing out much of the division, Wlad's recent defenses have been against either opponents fulfilling sanctioning organization obligations, or fellow titlists Ruslan Chagaev and Sultan Ibragimov, both of whom came into their matches unbeaten. Chagaev was named WBA "champion in recess" by the organization ahead of the fight, however, thus his belt was not on the line.

Regardless, Wladimir Klitschko has not lost more than a handful of rounds against nine of the best available opponents.

At the end of the day, most complaints seem to center around the addition of clinching and measuring with the jab to Wlad's game.

It may not be pretty. In fact, a number of fighters have been blasted by fans and boxing scribes alike for excessive holding, but it's difficult to argue with a 90% knockout ratio, win or lose.

When you tune in to a Wladimir Klitschko bout, there's a ninety percent chance you'll get to see a stoppage either way. Avoiding a snooze on the ride there is, admittedly, the difficult part.

Past the style issue, which again is not easily overlooked by most fans and critics, Wlad has two other major strikes against him: he refuses to fight his big brother Vitali, who holds every splintered version of the WBC Heavyweight belt imaginable, and he is ruler of a division that Lennox Lewis left without a clear successor.

As to the first affliction, not wanting to fight your own brother is regrettable, but probably understandable.

The second part likely accounts for much of the underlying criticism.

Two notable former champions that also underwent harsh judgment during their respective reigns: Larry Holmes, and none other than Lennox Lewis.

Holmes was pestered by objections over his opposition through much of his impressive title reign, and not to mention constant comparisons to his predecessor, Muhammad Ali. "The Easton Assassin" Holmes reacted to most of the questions regarding his chin, flat performances, clowning, and inability to become equal with his idol Ali with plain old grumpiness.

A lack of strong national roots appeared to prevent Lewis from gaining a strong following early in his career. A stoppage loss to inconsistent quasi-contender Oliver McCall derailed much of his momentum, and any sort of confidence in Lewis as a potential tough champion was questioned as a result. That is, until his final matchup against Wlad's big brother Vitali, where Lennox was forced to fight his way back from a deficit on the scorecards and destroy Vitali's facial tissue.

It seems many Ali fans still feel bitter toward Holmes for all but closing the book on "The Greatest"'s career, and a number of folks still vividly recall the images of Lewis getting flattened by both Hasim Rahman and Oliver McCall, but history has smiled upon both men.

In hindsight, Holmes in generally seen as one of the more dominant and skilled champions of the current era, and the same fans who dubbed Lewis a champion without much charm, personality or enduring quality often fondly remember the last time there was an unquestionable, universal heavyweight champion.

But Lennox Lewis clearly bested Holyfield in 1999 (horrible split decision draw notwithstanding), and Larry Holmes was able to cement his championship claim by sending Ali into "retirement" -- similar to how Marciano wasn't viewed as a legitimate contender until smashing Joe Louis.

While big brother Vitali was given the opportunity to forcefully inherit the heavyweight championship from Lennox Lewis, Wladimir was not afforded the same luxury.

The lack of a concrete champions leading up to his current reign, or even just "best of the division," has made Wlad's transition from post-champ scrambler to dominant kingpin a hard sell. And the dearth of exciting contenders in the division means it's not likely to get much easier.

Although heavyweight has suffered through a solid decade of woeful competition, one fighter has clawed his way to the top of the heap and led by example as a well-spoken, well-educated and respectful champion, training like a beast and coming into every fight in outstanding condition, willing to go a full 12 rounds.

Ultimately, when the the dust from this pitiful division has settled, Wladimir's stylistic faults may just be overlooked, and his career accomplishments embraced.

In a chaotic division sickened by corrupt alphabet organizations and blown-up smaller fighters trying to pull in heavyweight purses, some measure of clarity eventually counts for something.