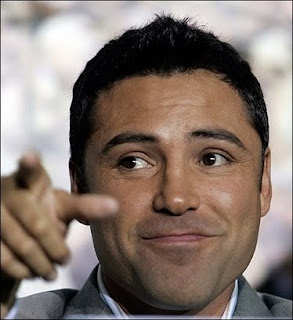 Few sports exhibit the same cutthroat business model of boxing. Perhaps the solitary nature of the sport compounds the ruthlessness, but in fact most other sports seem to emphasize, at least on the surface, creating and maintaining a level field of play - salary caps, conduct policies, universal governing organizations, etc.Boxing has always operated under the guidance of its own Golden Rule: he who has the gold greases the palms of those who make the rules.However, Golden Boy Promotions president Oscar de la Hoya is apparently looking to reform that idea.In a September 27th interview with Broadcasting & Cable, De la Hoya ruffled quite a few feathers by claiming the sport would be much better off with Golden Boy Promotions as the sole promoter and distributor of boxing, directly referencing and praising the business model of the Ultimate Fighting Championship and what it has done for mixed martial arts.Fellow promoters Gary Shaw and Bob Arum seemed angrily annoyed by the interview; Arum suggested Oscar's ideas would be illegal, and Shaw claimed he'd warned HBO about Golden Boy's attempt at a monopoly.All feigned outrage aside, the question becomes whether or not a UFC-like business model would even work in the sport of boxing -- or, more accurately, who that model would be good for.

*******
Lou Dibella was the only one who got it right; he essentially laughed off Oscar's comments, saying it was business as usual, and citing Golden Boy's close relationship with HBO as an example.As it stands, promoters organizing boxing cards that feature fighters under their promotional banners, especially against one another, is nothing new. It maximizes profit and allows you to avoid working with other promoters, who you may or may not have undercut, sold out or snatched a fighter from in the past. Most importantly, promoting is a business, not a charity.But the UFC is more than a promoter.The UFC has become synonymous with the sport of mixed martial arts itself, despite many other organizations like Strikeforce, the now-defunct PrideFC and it's successor DREAM doing very well at times. The more popular athletes in the UFC are among the most popular athletes in the world.In addition to being easily the most popular MMA organization, the UFC has also hooked up with a cable television channel, SpikeTV, whose core demographic is young males, to exclusively air its non-PPV fight cards.A big difference between MMA and boxing, and a big reason why it would be difficult to apply the former's workings to the latter, is the amount each pays its fighters.While HBO has seemingly set its financial bar too high, paying its "house" fighters much more than they're worth in reality, the UFC often spends less on purses for an entire event than HBO does on only one of its house fighters.That said, it's no wonder Oscar would like to mimic the UFC in terms of controlling the sport.If a fighter has nowhere else (or very few places) to go to make good money, even if "good" is only relative, then it leaves him no other choice but to play ball. This, of course, would be great for the promoter.But boxing is a deeply-evolved sport compared to MMA, styles and technique perfection aside. However, more time has also given boxing plenty of opportunities to fragment itself beyond the point of recognition.Boxing has had more than one belt or champion per division for more years of its history than not, meaning more sanctioning organizations, rankings-makers and conflicting interests. That's without mentioning promoters, managers and the various entities controlling television dates. Delving into the world of boxing sponsorship (or lack thereof) is yet another hang-up on this issue.At the end of the day, there are too many hands reaching out to grab loot for boxing to become much like the UFC.The older promoters Oscar specifically mentioned in his interview, Don King and Bob Arum, both seem to still hold decent sway over sanctioning bodies and numerous powers that be. Arum's company Top Rank remains a force in boxing's premier city, Las Vegas.Sanctioning bodies themselves would fight a new world order in the sport tooth and nail, as it wouldn't allow them to collect sanctioning fees on their interim champions, Super champions, Champions Emeritae, Silver champions and borderline useless eliminators.

Most importantly, Golden Boy would have to find a way to completely bypass HBO as a distributor. No easy feat considering HBO has probably become boxing's biggest promoter itself.

Golden Boy Promotions may actually be closer to dominating the promotional action of boxing than it realizes, though. Aside from being headed by one of the most popular fighters the sport has ever known and one of the most recognizable faces in the sports world, Golden Boy seems to have its own chokehold on HBO television dates -- the most coveted boxing airtime this side of the Atlantic.

The problem is unlike the UFC, Golden Boy has rarely sought to actually develop fighters. Rather, the promotional company seems to either sign established fighters toward the end of their careers for its younger, more marketable guys to feed off, or stars who have become free agents or are in some way connected to de la Hoya.

With "The Ultimate Fighter," the UFC has banked heavily on a mainstream, reality-based show featuring young and/or deserving prospects and pugs. These fighters are then used to fill undercards and matched accordingly to produce exciting fights.

The best Golden Boy could muster was a lame attempt at beating "The Contender" to the punch with a show called "The Next Great Champ," a reality program with unknown fighters that produced abysmal ratings and was quickly canceled. An attempt to create an 8 round championship belt did little to boost interest.

Upon creating Golden Boy Promotions, Oscar de la Hoya promised to bring boxing back to the fans, hosting affordable local shows and actively recruiting young prospects to ensure that the future of the sport is prosperous.

Ultimately, Oscar has done little else than evolve into the same mob bosses he's promised to vanquish.

Mixed martial arts continues to school the sweet science in the art of promotion, marketing and generation of interest. Us masochists can only hope to be entertained as these delusional boxing figureheads happily eat each other alive.