Archie Moore, the light heavyweight king who ruled for most of the 1950s, once said of bantamweight Manuel Ortiz, “He had his weaknesses, but don’t we all?”

In 1943, about one year into Ortiz’s reign at bantamweight, his only weakness appeared to be a slow-warming motor. From the time he defeated Lou Salica for bantam laurels in August of 1942 to his October of 1946 loss to Carlos Chavez, Ortiz fought 38 times, winning all but one: a loss to a bigger and slicker future featherweight ruler Willie Pep. 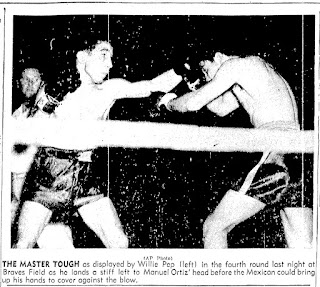 In those four years, Ortiz defended the bantamweight title a staggering 15 times and became a literal West Coast boxing icon. There existed two major Los Angeles boxing venues at the time, the Olympic Auditorium and the American Legion Stadium in Hollywood, and Ortiz fought at them seven and nine times respectively during that run.

Ortiz so entrenched himself in the Southern California fight scene that he fought many opponents multiple times, shrugging off tournament brackets they won. Their October 1, 1943 clash was the third fight between Ortiz and Leonardo Lopez, a rugged scrap artist from Mexico City, and the 7th defense of Ortiz’s title.

A farmer in his past life, Ortiz relocated from Corona, Calif. to El Centro, just north of the Mexican border. Ortiz honed his skills at the El Centro Athletic Club and was eventually sent to fight in tournaments at the Orange County Athletic Club alongside stablemate Joe Villegas. At 20-years-old he fought several fellow amateurs on fight cards promoted by Sam Sampson, who handled the events.

While a workhorse in the ring, Ortiz still relied on clever positioning and inside fighting to defeat opponents. Even so, he tabbed 11 losses before knocking Lopez out in 10 rounds at Tijuana’s famed coastal bullring, Plaza de Toros. Their first bout belonged to a larger event that included a rodeo, dance exhibition, wartime firepower demonstration and a parade.

When Ortiz and Lopez hooked up again at the American Legion Stadium in May of 1943, Ortiz, now the bantamweight champion, had made so many appearances at the venue he may as well have sold concessions. But both men had learned and improved, and especially Lopez, who’d gotten away from Mexico City and sparred in Panama and Southern California — including with Ortiz. This time Ortiz settled for a close decision win Lopez made him toil for in a non-title affair.

Alongside his other battles and drawn-out beatings, the Lopez rematch confirmed Ortiz’s reputation as a slow starter. Five years into his professional career, however, he’d clearly captured stardom as well as the championship. “Battling” Noel Johnson, an old former lightweight from Minnesota, managed Ortiz from very early on, and the more experienced Tommy Farmer joined the team, aiding with a title shot. Then after defeating Lopez a second time Ortiz opted for a fight in Mexico City, taking temporary manager Reuben Padilla from Calexico. It was nearly a full-fledged entourage.

Ortiz made quick work of journeyman Fillo Gonzalez and returned to Southern California for a third fight with Lopez, this time with Ortiz’s title at risk. The 6,500-seat Legion Stadium reached a near-sellout two weeks before the fight, with many of the tickets only available to those who bought something resembling a season ticket plan at the Legion.

Days before the bout, Los Angeles Times reports hit the streets that 50 percent of profits for the Ortiz-Lopez go would benefit Service Sports, Inc., an organization that gathered boxing equipment for members of the armed forces.

The champion melted off any necessary weight working his 250-acre farm in Imperial Valley, Calif., but reporters from a handful of Southern California publications speculated that Ortiz would soon outgrow bantamweight. Odds were never in question, though, as Ortiz started a 10-to-7 favorite and money continued to back him, pushing odds to 2-to-1.

Making weight with a half-pound to spare, “Maulin’ Manuel” still demonstrated a size and strength advantage early against Lopez, roughly handling his foe as he pleased. Lopez had no answer this time. Ortiz might not have outgrown the division, but he outgrew their rivalry.

In round 2 Ortiz had Lopez nearly ready to go home early as a result of repeated 1-2’s upstairs. Ortiz simply never allowed him to contest the fight in any way.

A United Press reporter wrote, “Cut over one eye and bleeding buckets, Lopez was humped over on his head with his knees buckled under him at the end of the third, only the bell away from a knockout.”

Lopez toughed through nearly all of the 4th round but offered no meaningful offense. Ortiz stuck Lopez in neutral corner, softening him up about the middle before following up with head shots. Referee Abe Roth, a regular at both the Olympic Auditorium and Legion Stadium, later told reporters he would have stopped the bout had Ortiz not done it for him.

After two minutes and 40 seconds of fighting, Ortiz landed a right hand either on the heart or the jaw, depending on the publication, and Lopez met the sandman. Roth gave a full 10 count with Lopez snugly tuckered out on the canvas.

Ortiz wouldn’t lose to Pep for another nine months and that setback wouldn’t blunt his momentum anyway. The bantamweight champion had matters well in hand, and developing the skills and instinct to dispatch Lopez in such fashion proved it.

Ironically Lopez’s brave showing led him to opportunities against Juan Leanos and Sandy Saddler, even if he was ostensibly spent as a fighter and only managed to squeak by the former.

Like Ortiz, Southern California’s fighting scene took its time heating up. A golden era awaited, flanked by eras stuffed with entertainment and history. But Ortiz, the El Centro whiz bang kid, ensured boxing would be a mainstay.