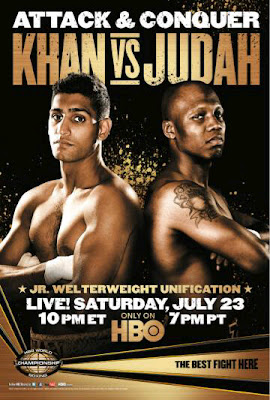 Though it may seem like eons ago that amateur boxing was considered relevant to contemporary professional pugilism, the non-paid ranks still continue to churn out fighters with star potential.


Most of the top names in the sport - guys like Mayweather Jr, Cotto, both Klitschko brothers, even Manny Pacquiao - had unusually successful amateur stints.


Additionally, and not surprisingly, Cuban amateurs continue to defect and become at least short-term success stories of the sweet science.


Junior welterweight belt-holders Amir Khan and Zab Judah are no exception to this phenomena.


Khan, now on a breakaway towards stardom with a record of 25-1 (17 KO), was an amateur standout in the U.K., stuffing a number of amateur championships under his belt, before winning Silver in the 2004 Olympics.


Judah claims a final amateur record of 110-5, and took home a National Golden Gloves title in 1995, a PAL National Championship in 1996, and three NY Golden Gloves titles. Zab failed to qualify for the 1996 U.S. Olympic team, however, losing to future titlist David Diaz in the box-off.


The link between amateur and professional success, though now more blurry, is still quite strong.


But on top of amateur success, a fighter must prove himself watchable. That is, offer some style point, quirk or gimmick that draws the attention of potential ticket buyers and television viewers. Whether they're for or against you, the numbers trump all.

In March 1989, a young heavyweight with a very good amateur career and Silver medal in the 1988 Olympics dropped the headgear and went pro - not long after perhaps the epitome of showmanship, Jorge Paez, won his first world title.

Within 18 months of turning pro, and despite an overall sense of skepticism regarding his future success, young Riddick Bowe found himself headlining smaller cards and trouncing name guys on the undercards of fights like Holyfield-Douglas and Tyson-Ruddock II.


One year later, Bowe wound up snagging the chance to headline a TVKO (then an HBO PPV subdivision) Pay-per-view card against future heavyweight belt-holder Bruce Seldon, flattening him twice with a pair of left hooks.

With the help of a damaging inside game and eccentric manager Rock Newman (and an entourage of nogoodniks), Bowe became something of a well-recognized, then unmissable attraction. Whether it was leveling half of the top 25 at heavyweight with uppercuts and hooks, the melees at press conferences or the mid-fight brawls, Riddick Bowe was someone you were definitely tuning in for, because something ridiculous was bound to happen.

Not far from the Brownsville neighborhood where Bowe grew up, an adolescent Zab Judah palled around with mercurial heavyweight superstar Mike Tyson - also from Brownsville, Brooklyn.


Clearly groomed for boxing greatness by his father (and former kickboxing champion) Yoel from a young age, Zab trained with his brothers Daniel and Josiah, often at famed Gleason's Gym. Zabdiel proved to be the most talented of the trio, his notable amateur career drawing the attention of promotional outfit Main Events, whose banner Zab turned pro under in 1996.


Having a strong promotional and managerial foundation meant Judah fought on the same cards as guys like Roy Jones Jr., Pernell Whitaker, Charles Brewer and David Tua before he'd even fought 10 total rounds as a professional.


Zab, 41-6 (28 KO) and 2 No Contests, ran through most of his early opposition, continued to build his reputation and received mainstream support from a number of established boxing heads, Tyson in particular, and Judah became a Showtime and PPV undercard staple.


Even so, Zab battered the likes of Jan Piet Bergman, Terron Millett and Wilfredo Negron and decisioned now-familiar names Micky Ward and Junior Witter, albeit with some hiccups, but generally without incident.


But Judah, never a saint, seemed to become a sort of volatile, predictably unpredictable character, beginning for the most part with his second-round knockout loss to Kostya Tszyu in a bout to create a new undisputed 140 lb. champion.


Since and including the Tszyu fight, Zab's delightful or damnable offenses included, in no particular order:


Trying to strike ring officials with a folding chair; hitting low to stem Floyd Mayweather Jr.'s assault, which resulted in a brawl that Rock Newman would've been proud of; landing an unreal left uppercut on Omar Weis for a knockdown in his comeback fight on ESPN2 after being suspended following the Tszyu fight; trying to choke referee Jay Nady in a furious protest over being stopped against Tszyu, despite flopping around the ring; fighting about even-up with a really spent Rafael Pineda, and getting stunned in the process, in 2004; getting bludgeoned by Miguel Cotto, above and below the beltline; walking into Cory Spinks' backyard and ruthlessly stopping him in 9 rounds to become the undisputed welterweight champion of the world.


The laundry list adds up to "television attraction," and Zab has been one for a long while; with Main Events from his pro debut to 2002, then with Don King, until re-signing with Main Events in May of last year.


And even as Zab seems to be a cooler customer at 33-years old, in and out of ring, news-worthy blurbs still flow.


A few days before what is basically the vet's latest comeback, stories of Zab's born-again Christianity, hiring of Pernell Whitaker as trainer and Victor Conte as a...person who tells him what to eat, have dominated his side of the promotion.


Zab may have dispensed with the trash talk, street fights and nonsense, seemingly in the midst of his new lease on life in Las Vegas, but prevailing opinion once again places conditions on his success - usually of the "If only he could put it all together" variety.


A Silver medal at the 2004 Olympics in Athens, and the box-offs leading to the games, propelled Amir Khan from regional standout, to a guy who, in his last few amateur fights drew very respectable crowds.


In fact, his revenge win over Mario Kindelan, who beat out Khan for Gold in Athens, reportedly got over 6 million TV views in the U.K.


As always, increasing notoriety and a world class pedigree made for high expectations, and Amir signed with promoter Frank Warren.


Khan may not have had the whirlwind, antic-filled fledgling pro career that Bowe or even Zab became known for, but American and British fans alike seemed hesitant to embrace the young fighter, despite impressive handspeed and a usually-entertaining style. Amir was named Prospect of the Year by a number of publications in 2007 though.


Still, Khan had shown himself vulnerable in early amateur losses, and also to light-hitting Craig Watson not long before he turned pro. When he wasn't out-classing foes in impressive fashion, he was getting badly wobbled by the usually non-dangerous Willie Limond, and later the scrappy but C-class Michael Gomez.


"King" Khan's braggadocio and mobile style made him more Hamed than Hatton to the British public - more Audley than Bruno. And when Khan was demolished by nearly completely unknown Colombian slugger Breidis Prescott in less than a round, he earned the nickname "A mere con," given by overseas press who seemed to relish the defeat.


Promptly hiring trainer to the stars Freddie Roach not only guaranteed Khan a higher level of schooling than he'd gotten previously, but the trainer's famed "Wild Card" gym in Los Angeles brought with it a promotional package all its own, thanks to Roach's star student, international celebrity Manny Pacquiao.


Khan's path to redemption had him blasting Oisin Fagan in 2, and out-speeding Marco Antonio Barrera in a bout that ended with a 5-round Technical Decision, thanks to an unintentional headbutt.


He looked less impressive - especially in the championship rounds - in taking WBA champ Andriy Kotelnyk's belt, but the tough Ukrainian gutcheck artist makes it easy for nobody.


Questions lingered in regards to Khan's whiskers, and his walkovers of weak punchers Paul Malignaggi and Dmitriy Salita did nothing to quell them. But outside the ropes, Khan split with career-long promoter Frank Warren and signed with veritable HBO sidekick Golden Boy Promotions, headed by the now-oddballesque Oscar de la Hoya, in January, 2010.


In December, 2010, Khan gave every ounce of everything he had to the boxing gods in a narrow, life-sapping win over Argentine Marcos Maidana, in a "Fight of the Year" type of affair.


The win provided an extra jolt to the Bolton native's career, as over 17,000 fan attended (and objected to) Khan's odd 6-round technical decision over Paul McCloskey last April.


A series of failed negotiations with Timothy Bradley later, and Khan finds himself a few days shy of his unification bout with IBF belt-holder Zab Judah.


24-year old Khan may still yet arrive at his physical zenith, which is a scary thought. But as it is now, the young man possesses some of the quickest hands in the game today, and his feet aren't too bad either.


The Maidana fight once again demonstrated that Khan can be hurt and that he winds down in the later rounds, but he also survived the constant pressure of a thudding puncher who never relents. Past merely surviving, Khan fought back, outing a set of intangibles many believed he couldn't have.


A lack of head movement and a lazy defense could very well be his most troublesome stylistic issues, though. Maidana brought heat, but in the way of wider shots that Khan could usually see coming, even when hurt.


That's where Zab comes in.


All but gone is the snarl and cursing, and Zab's overall in-ring ability seems to have also dulled out. The younger fighter who would use quick feet to avoid a clinch, step back and launch uppercuts, has slid to an overly-economical guy who is quick to clutch in close.


Judah was fortunate to get by hard-charging Lucas Matthysse, but while he was behind on the cards at the time of the stoppage, Zab salvaged the win (and snagged his belt) against Kaizer Mabuza on the strength of a bailout left hand and the follow-up barrage.


When Zab sits down and puts meaning into a left hand, it hurts. When he does.


That said, the "when" should be the story of this fight, as it will probably never come for Zab, who will wait and feint more than punch.


Amir Khan is likely too fast for even Zab Judah, at this point in his career, and unlike Zab, Amir uses his jab consistently and intelligently under the tutelage of Freddie Roach, McCloskey fight notwithstanding.


Barring an errant left hand bomb that finds its way through the occasionally lax guard of Khan, and probably early, the 3:1 odds in favor of Amir reflect the reality of this matchup.