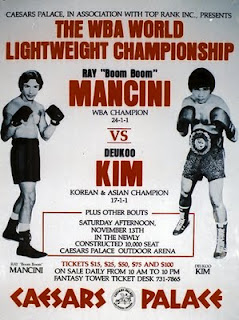 Probably the most dreaded portion of training camp may also be the least-covered.


It might be that it's not that interesting to most folks. But it also could be that fighters are notorious jerks during the weight cutting process.


Regardless, fighters are cutting weight every day, and often to the point of physiological detriment.

It's a reality of combat sports, wrestling, etc. - one of the accepted baseline conditions of being a top level athlete willing to risk health to reap whichever reward in sight.


Cutting inordinate amounts of weight was once referred to as "the new way to cheat," but it's unclear who's actually being cheated, whether in the long run, or a few punches away.

"Hammerin' Hank" Armstrong's weight-transcending adventures were well-chronicled in the 1930's and 40's.


Skipping forward a bit, an instance where concerns over the weight cutting process arose in the 1960’s when Emile Griffith and Nino Benvenuti saw their rematch at Shea Stadium delayed by one day because of rain. Old school pundits questioned whether or not both fighters would be able to make weight a second time, as both fighters were to be re-weighed, sticking to the “same day weigh-in” procedure of old.

In an anti-climactic turn for the purposes of this article, both fighters made weight, delivered an entertaining rematch (and rubbermatch) and sailed into the proverbial sunset with a Ring Magazine Fight of the Year honor for their first meeting.

But the occasional chatter became a full fledged conversation, and took on a decidedly darker tone in the early 1980’s.

What should have been a showcase for a young, good-looking kid from Youngstown, Ohio in 1982, became the stone skipped into the calm-ish pond, sending ripples through the sport with such force that its effects are still felt today.

It didn’t take long for sanctioning organizations to begin shortening title fights following Duk Koo Kim’s death, blaming the frightful beating handed to him by Ray Mancini on the then-current championship round system. Subtracting 3 rounds from the established maximum of 15 likely seemed a logical fix in the wake of such tragedy. Fewer rounds meant fewer punches for a fighter to take, right?

Not widely covered at the time were Kim's weight issues going into the bout, struggling to drop poundage before the weigh-in and leaving a prophetic note in his hotel room that read "Kill or be killed."


What is thought to have been the final straw though, is a canceled light heavyweight title bout between Michael Spinks and Eddie Mustafa Muhammad in July of 1983, less than a year after Kim’s passing. Muhammad seemed unrepentant when speaking to media after failing to make weight for the bout, and the folks who lost money on the heavily-promoted match weren’t happy.

Like Kim, Muhammad had a history of weight troubles, fighting Renaldo Snipes at heavyweight in 1981 for that specific reason.


Also notable was the controversy at the actual weigh-in for Spinks-Muhammad. Then head of the Washington D.C. Boxing and Wrestling Commission, Cora Wilds, was accused by the Muhammad camp of tampering with the official scales that she herself provided. According to the one and only Bert Sugar, he attempted to weigh a 3-lb. bag of flour on the scale, which then read 5 lbs.


Where he got a 3-lb. bag of flour, nobody knows. But Wilds was later convicted of defrauding the city, then became Cora Masters Barry after marrying former D.C. mayor Marion Barry.


Nevertheless, the result of the cancellation was sanctioning organizations drifting away from same-day weigh-ins and having fighters step on the scale the day before fights, presumably to allow more time to re-hydrate, within a matter of a few years.

Instead of encouraging fighters to remain at their more “natural” weights and stay hydrated, the extra day seems to have cleared the way for guys more willing and able to cut serious weight, to gain a significant competitive edge.

In perhaps the most famous recent “weight” incident, Joey Gamache filed a suit in 2006 against Arturo Gatti, alleging Gatti breached their fight contract by falsely representing his fight night weight and gaining almost 20 lbs. overnight. Gamache reportedly suffers severe migraines stemming from the 2000 bout, which sent him to the hospital for two days.

Not to be outdone, from Floyd Mayweather to Diego Corrales, or Jose Luis Castillo to Julio Cesar Chavez Jr., several smaller incidents have stung the sport over the last handful of years. The weight drama trio of Nate Campbell, Ali Funeka and Joan Guzman could write a grocery store pamphlet on how not to make the contracted limit.

According to a study conducted by a team of researchers from the UK working on the International Journal of Sports Medicine, dehydration directly affects the way the human brain is able to absorb a blow to the head. The brain of a dehydrated boxer, for example, “will travel further within the cranium before it meets the skull,” and “accelerate to higher velocities” within the skull, say researchers, making the brain more susceptible to contusions and other injuries.

In other words, fighters killing themselves on stationary bikes in the sauna, while wearing rubber weight loss suits, flirt with the idea of their grey matter adopting more pinball-like qualities than those not struggling to make weight.

In addition to the apparent effects of rapid weight loss on fighters inside the ring, many argue that the day-before weigh-in process has literally changed the way fights are negotiated and made.

According to the executive director of the Nevada State Athletic Commission, Keith Kizer, “It’s actually becoming part of the matchmaking process, with some people not wanting to fight a certain fighter because he’s known to put on extra weight before the weigh-in. Or sometimes they’ll agree to a fight because they know the opponent will come in depleted.”

As we already know, catchweights and odd weight limits weren’t exactly introduced yesterday, but the sport has recently seen a number of fighters targeting opponents known to have issues making weight.

In a highly criticized move, Manny Pacquiao demanded Miguel Cotto fight him under the 147 lb. limit in 2009, and subsequently demanded Cotto’s WBO belt be put on the line, despite promises to the media that they would only ask for the catchweight without the title up for grabs. Despicably, the WBO obliged, and Cotto moved up yet another weight division immediately after losing to Pacquiao.

Unfortunately, as boxing fans have learned the hard way time and again, real change in the sport generally will not come unless someone’s pocketbook takes a serious hit, or when tragedy bores its way into the consciousness of the sport.

While the WBC organization had already begun conducting an investigation into the neurological effects of rounds 13, 14 and 15 by the time Mancini vs. Kim took place in 1982, it wasn’t until shortly after Spinks and Muhammad’s botched rematch in 1983 that the WBC shortened the length of their title fights from 15 rounds to 12. The canceled bout lost the organization a good deal of money.

Further, just as television networks seem to stand behind many decisions made in the sport today, rumors swirled about the sport, suggesting that networks such as CBS, NBC and ABC were pressuring sanctioning organizations to shorten fights because 15 rounds of action exceeded the 1-hour time slots networks allotted. Cutting a full 17 minutes off a broadcast meant more time for other programming, thus more money.

To be fair, the investigation the WBC conducted eventually led to fighters competing for their belts receiving mandatory electroencephalograms (EEG’s), as well as mandatory standing eight counts for fighters who have been knocked down, a step in the right direction at the time.

Whether change stems from greed or concern, weight fluctuation of 15 lbs. in less than a day being common among world class fighter is not a healthy system. It’s not safe for average, healthy folks who don’t have to take punishment for 12 rounds, and much less so for fighters who do.

As TV networks seemingly control the sport and are capable of effectively changing its direction, a move back to 15 rounds, right or wrong, is not likely. But the same-day weigh-in system may serve to prevent fighters from attempting to dry out as much as they currently do.

An inevitable byproduct of same-day weigh-in’s would be a short period of adjustment, which would likely see a few fights scrapped last minute because one guy couldn’t make weight. But we also get that already.

A welcome side effect could potentially be that we get to see world class fighters competing at their absolute best, rather than a zombie’d doppelganger struggling to balance weight desperately lost, and weight frantically gained.

Perhaps a more proactive interest in fighters' health would result in a safer and widely-respected sport all around.