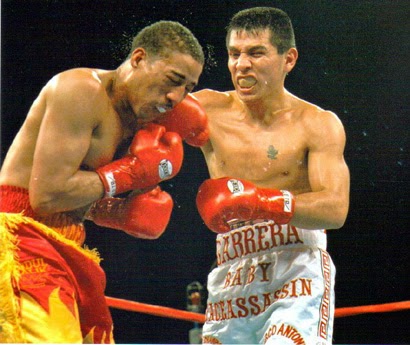 When reports of a new HBO Boxing series surfaced sometime around the New Year in 1996, the obvious intention was to showcase younger or lesser-known talent. Perhaps not quite as apparent was the network’s specific intention to expand its international reach by including fighters from abroad, as HBO would control all international rights to a boxing series for the first time ever.

For its February 3 premier, two of the four fighters chosen for the show’s maiden voyage hailed from outside of the United States: lanky Brazilian unknown Giovanni Andrade, and Mexican part-time law student (and WBO junior featherweight titlist) Marco Antonio Barrera, a 22-year-old who had been appropriately named 1995’s international fighter of the year by the BWAA.

The opening bout of the broadcast, WBO super flyweight champ Johnny Tapia vs. Andrade, did little to boost any interest at all, much less outside the U.S. Moments into the fight, Tapia caught Andrade with a punch below the equator, which appeared to set the tone. Andrade was floored by a right hand to the temple in the second round, rose, and hit the deck again near the end of the round, courtesy of a hard hook to the waistband. An unfortunate ending, Andrade chose to roll around on the canvas in feigned agony as referee Raul Caiz, Sr. stopped the fight.

Salvaging the broadcast seemed a sizable task following the disappointing outcome, but Barrera and Kennedy McKinney lightened the mood -- and then some.  The crowd of 7,900 at the Great Western Forum in Inglewood, CA witnessed a “Fight of the Year” caliber main event, contested on a reasonably high level of skill despite the ferocity of the exchanges.

The former Olympic gold medalist McKinney’s drug and alcohol issues were well-documented earlier in his career, and the pre-fight tale wasn’t without its own drama. At a press conference in the Forum Club the week of the fight, Barrera slapped Kennedy in the mouth as he was jawing about Barrera’s lack of accomplishments – at the same podium where Riddick Bowe punched Larry Donald in 1994 while promoting their fight. Soon after, the 30-year old McKinney scrapped his WBU title rather than pay the $10,000 sanctioning fee for the fight.

Barrera was no stranger to the Forum, and the McKinney fight represented his 9th time making an appearance there.

Neither man wasted time visibly establishing a strategy in the first round. Though Barrera often leapt in wildly and was able to connect with lead right hands and some tough body shots, McKinney’s consistent jab and good footwork set a range that wasn’t easy for Barrera to work with at times.

The champion Barrera almost seemed to be taking good chunks of round 3 off, perhaps saving energy for a much better the 4th that saw both men finding success and trading at the bell, prompting Larry Merchant to state, “This is about as good as it gets.”

As the bout moved into the middle rounds, Barrera began to separate himself from McKinney very slightly, establishing his own jab from longer ranges and crushing Kennedy’s midsection with hooks in close. McKinney wasn’t far behind, but his movement slowed as he fought more off his heels than his toes, digging in and attempting match Barrera’s higher output, and earning a puffy left eye in the 5th and bloody mouth in the 7th.

Tempo slowed considerably in round 8, and Barrera again showed off a nice jab before dropping McKinney with a right hand. After beating the count, Kennedy was swarmed and dropped once more officially in the round, though he fell into the roped in what could have been called another.

McKinney’s movement became more panicked as his face swelled in the 9th, and he was again knocked down by a series of right hands, but found a way to finish the round. The tide turned in round 10 when Barrera appeared wobbled against the ropes by McKinney, who looked to be making a stand as the two exchanged furiously again before ref Pat Russell absurdly interrupted a good sequence to give McKinney his mouthpiece back.

A jabbing battle broke out in round 11 initially, but McKinney made Barrera’s glove touch the canvas after the two traded right hands – Marco’s first ever knockdown. The two again ended the round trading.

The final round was greeted with cheers, and Barrera savagely brutalized Kennedy’s midsection, knocking him down twice officially, before lowering the boom with a right hand that took all the remaining fight out of Kennedy, and Russell called the fight with less than a minute left.

All told, Barrera landed 436 of 875 punches in the fight – a statistic written all over Kennedy McKinney’s bruised and swollen mug.

Even in harsh defeat, McKinney displayed memorable heart by rising from multiple knockdowns and giving his all fighting back, rarely clinching or giving way to caution. But in his 40th fight, through the static expression and predatory instinct, Barrera showed glimpses of the technician he would go on to become.