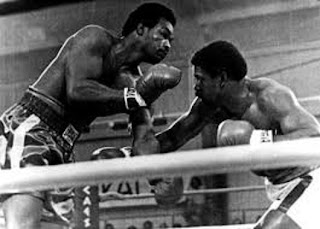 During the week of January 24, 1976, it's more likely that sports fans were debating missed field goals from Superbowl X the weekend before to the tune of their brand new "Frampton Comes Alive" records, than worrying about the comeback of a hulking figure once considered the most feared guy around.


George Foreman would give them a little under 15 minutes worth of a jarring wake up though, as he went on to deliver one of the more classic performances of his career, with a little help from fifth-ranked heavyweight contender Ron Lyle.


The tumultuous battle was more natural disaster than prizefight - like two sizable structures taking turns battering one another to see which falls first.


The two-way walloping is still a fan favorite over 30 years later.

"Big" George Foreman was something of a reformed delinquent upon beginning his amateur career, but finished it with a gold medal at the 1968 Olympic Games in Mexico City.

Generally smashing his way through a series of no-name and/or no-hope opponents early in his professional career, Foreman became known for his thudding punching power and nasty in-ring demeanor.

George entered the ring against champion Joe Frazier a 3-1 underdog in 1973, despite riding a 22-fight KO streak.

In October 1974, "The Rumble in the Jungle" and its aftermath seemed to temporarily smack the chip right off Foreman's shoulder. Former heavyweight champion Muhammad Ali withstood a number of hard body shots, but sapped Foreman's energy by countering off the ropes between George's missed shots. In the eighth round, a hard (albeit unspectacular) right hand put George on the deck and rendered him unable to continue. And just like that, Foreman lost the heavyweight championship of the world.


Determined to shake the memory of being dismissed in Zaire, George reportedly came up with the idea to fight five opponents in a single night in exhibition matches, and did so the following April, 1975 in Toronto. "Foreman Fights Five!" proved to be something of a mockery, as Ali and Howard Cosell heckled Foreman while commentating the television broadcast, the opponents taunted him, and Foreman appeared sluggish and rusty despite stopping three of the five.


Sporting Gil Clancy as a new cornerman, Foreman sought another championship, which pitted him against ranked contender Ron Lyle.

Ron Lyle involved himself in plenty of nonsense as a youth as well, and wound up serving over 7 years of prison time for murder. While incarcerated, Lyle took up a number of sports, including boxing, and eventually joined the Canon City State Penitentiary boxing team.

Following his parole release in 1969, Lyle had a short, yet relatively successful amateur career, winning a number of amateur championships - including the 1970 National AAU Heavyweight Championship.

Ron Lyle turned pro in 1971, and in less than 2 years had compiled a record of 19-0 (17 KO), including early knockouts of former contender Buster Mathis and fringe contender Luis Pires.

A decision loss to hard-nosed Jerry Quarry in 1973 brought his record to 19-1. Lyle rebounded and managed to stay in the heavyweight picture with wins over familiar names Jeurgen Blin and Gregorio Peralta, and legit contenders Jimmy Ellis and Oscar Bonavena.

Spoiler Jimmy Young handed Lyle his second defeat in February of 1975, but Ron still got a crack at Ali and the title in May.

Winning on all three judges' scorecards through ten rounds and generally doing well on the outside while refusing to be rope-a-doped, Lyle took a sharp right hand to the mouth that staggered him backwards and into the ropes in the 11th round. Ali then unleashed a sustained and unanswered assault, raking Lyle with hooks and uppercuts. Referee Ferd Hernandez stopped the fight when his calls for Lyle to fight back fell on dazed ears.

After a four-month hiatus, Lyle returned in September, 1975 against crippling puncher Earnie Shavers. Lyle survived nearly being decapitated by a left hook late in the second round to rally in the 6th and stop Shavers in an entertaining bout.

For the better of five rounds, both fighters crushed each other with shot after shot, all while either badly hurt or exhausted. Or both.

A relatively sloppy affair, devoid of much conscious defending, Foreman and Lyle hurled bombs at each other and took turns going for the glory.

Foreman could barely raise his hand in victory at the end of the bout. "Big" George just didn't have a lot of wind left to celebrate it.