The Beast Just Got Fed 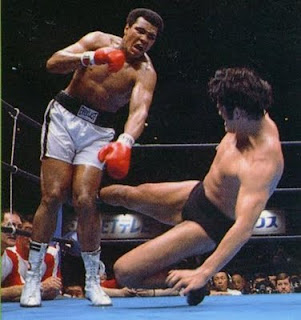 Many of us younger (or even just young-ish) boxing fans seem to have a somewhat utopian view of what the sport used to be like, as compared to what it's like now.


A lot of that may come from having guys like Bert Sugar spin fanciful yarns about promoters having rickety bleachers built around a shabby boxing ring so that tens of thousands of spectators could toss a nickel at a box to get in and catch a fight for the ages, that also happened to be extremely important to the fabric of the sport.


But said rose-colored outlook on yesterday's boxing (and your folks' music) may also be because sometimes it was true.


The sweet science really isn't operating on the same plane of popularity that it used to, and one of the clear indicators of that fact is the dearth of free boxing here in the U.S.


Getting the sport back onto a mainstream network is something pundits and aficionados have emphasized as one of the more important factors in helping to prove to a skeptical public that boxing isn't just a shady sideshow.


As has been the case in many other instances though, mixed martial arts (or more specifically, the UFC) has beaten boxing to the punch, securing a 7-year network deal with Fox to air live fights.

In the last 10 or so years, the closest boxing has come to landing a fight deal with a major network was the Budweiser Boxing Series in 2003 and 2004 - a series on NBC in conjunction with Spanish language channel Telemundo that featured rising potential contenders from the Main Events stable at the time like Panchito Bojado, Kermit Cintron and Rocky Juarez.

The series had very solid production, quality commentating and good fights, even pulling ratings in the high 2's in some areas, and NBC hadn't dabbled in boxing since the early 90's.

In other words, the UFC did in a very short period of time what boxing has been incapable of doing consistently for going on a couple of decades now.


But in what was essentially a microcosm of overall issues in the sport, the Budweiser series was canned for lack of sponsorship.


It's unreasonable to expect boxing to change its structure overnight, despite exactly that sweeping generalization being outlined in numerous "Let's Save Boxing!" plans. At the end of the day, good old-fashioned logic is all that need be applied.


For instance, of the two biggest promotional entities in boxing, Top Rank and Golden Boy Promotions, only Top Rank can say it has consistently built fighters. Granted Golden Boy is a fledgling outfit compared to Bob Arum's Top Rank, but Abner Mares is the first fighter to actually be guided to a world title by Golden Boy from his pro debut onward, Mares vs. Agbeko shenanigans notwithstanding.


On the other hand, the UFC has a television show specifically geared towards building prospects and quasi-contenders into championship material: The Ultimate Fighter. And they make use of the overflow on the program by showcasing guys who don't win but were perhaps interesting to viewers on undercard.


Further, the UFC has brought fans and viewers into the active mix by allowing them to help choose upcoming matchups on the approaching new season of the show.


In other words, the UFC is actively pursuing novel features that cater directly to fans.


In case it's not clear already, the next step is to point out that boxing's song and dance has become stale.


Even one of the few universal joys of attending a live boxing match, the atmosphere, has been gradually edged out off the top of the "Essentials of Making Good Fights" list in recent year, with promoters like Gary Shaw and Bob Arum clearly stating that the focus is on generating live gate dollars - not live gate crowds.


Basically what that means to fans is that tickets get over-priced, arenas get half cordoned off, and we get significant fights happening in Middleofnowhere, Illinois and Whogivesacrap, Arkansas in front of half-dead and underwhelmed crowds.


By contrast, the UFC will intentionally pan through a riled-up crowd as often as possible.


Combat sport preferences and all "boxing vs. MMA" knockdown, drag-out debates aside, it's clear that one sport is gaining serious traction while the other stagnates. How much of one caused the other is unclear, and there isn't necessarily as obvious a divide between the two as there once was, from a fan perspective, but it appears as if neither sport is going anywhere.


The small-minded figureheads of pugilism refuse to use the MMA model of marketing, promotion and even matchmaking to improve the sport of boxing though.

Boxing is neither dead nor dying, despite what Lou Dibella, Bob Arum and the like would have you believe when one of their guys loses.

However, the sport has indeed been in need of inventive and fresh ideas, preferably not regurgitated from the same motley crew of failures that have driven us into the ditch.


No matter how hard it tries, boxing cannot get rid of us hardcore fanatics. We'll always be here. But to flourish, we have to stop pretending like the same bad decisions will yield better results than the last few thousand times.


In order to change the perception of boxing in the U.S., the general public must be given a chance to enjoy it without their pockets emptying and expectations mocked.