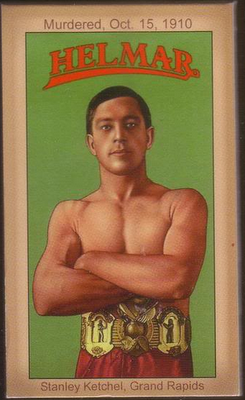 Right around the end of the 19th century, Butte, Montana was a dirty and rugged mining town, albeit a flourishing one. Nestled in a natural bowl surrounded by copper, gold and silver mines, Butte attracted thousands of immigrants from all over the globe at the turn of the century, making it Montana's largest city with just under 100,000 residents.


It was a blue collar town with blue collar vices - "No Smoking" signs were hung on corridors leading to mines (written in 16 languages), and there were about as many brothels and saloons as there were mines.


That was the type of town that Stanislaus Kiecal was kicking ass in at the age of 14.


His name was later Americanized to Stanley Ketchel, and he was an orphan at 14-years old. According to Stanley, upon arriving in Butte after a short stint as a train-riding hobo, a bouncer at a local whorehouse challenged him to a fight, which Ketchel then won with a single punch. Shortly thereafter, Stanley took over the bouncer's job and began fighting regularly for a few bucks at a local theater.


And that was all before turning professional at 16-years old and becoming middleweight champion at 21.


Aside from his more famous stroll-in-the-park-gone-wrong against Jack Johnson and a dreary 6-round draw with Sam Langford (that was presumably to promote their upcoming clash later in the year), Ketchel's rematch with Joe Thomas and first scrap against former light heavyweight champ Philadelphia Jack O'Brien were lauded by Ring Magazine editor Nat Fleischer for years as legendary slugfests.


Harry B. Smith of the San Francisco Chronicle said of the Thomas rematch, "Never was a better fight seen in California."


Before Ketchel and Langford were able to fight for real, Ketchel was shot in the back while in training camp, by a stable hand named Walter Dipley, who thought Ketchel was attempting to steal his wife away.


He died on October 15th, 1910 at 24-years old, and an estimated 7,000 to 8,000 people turned out for his Grand Rapids service, to honor their slain hero - a testament to the ease with which so many folks could identify with him.


Stanley Ketchel's final record stands at 51-4-4-1 (48 KO), and he is considered by many pundits who saw him live to be one of the greatest middleweight champions ever, despite such a short career.